ThSince August of 2018, 16 year old Greta Thunberg has been going on strike to demand steps toward a solution for the climate crisis. Instead of being in school each Friday, she has been outside the Swedish parliament building holding a sign that reads “skolstrejk för klimatet” (school strike for climate).

This started as a one-woman movement, but now thousands of youth in hundreds of countries around the world have joined Greta in striking to protest political inaction on climate change and global warming. These young climate activists are demanding increased activity from politicians to create stricter regulations to reduce the emissions that contribute to global warming.

Although this courageous young woman’s strike has garnered a lot of publicity, there has been no concrete political action (in Greta’s home country Sweden or anywhere else in the world) in response.

First, we must frame the climate issue as a crisis.

Movements like the school climate strike are important because they bring human, youthful and passionate awareness to the issue of climate change.

A common misconception is that climate change is a debate. Global warming is a fact that has been independently verified by many scientific agencies around the world. According to the Intergovernmental Panel on Climate Change(IPCC), a multi-governmental body of the United Nations, “Human-induced warming reached approximately 1°C (likely between 0.8°C and 1.2°C) above pre-industrial levels in 2017.” 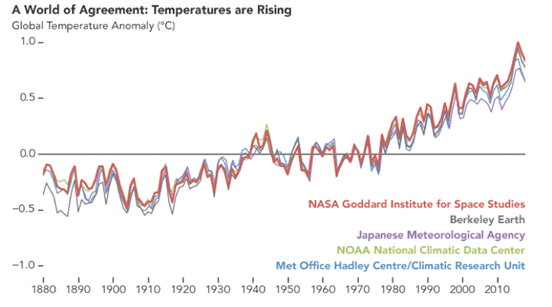 While the effects of this warming to date have been less than apocalyptic, the IPCC explains that problems (including more frequent and intense hurricanes, heat waves, floods and mass extinctions) will increase dramatically and, in some cases, catastrophically if this warming is allowed to continue unchecked.

In Greta’s address at the 2019 World Economic Forum Annual Meeting, she stated, “I don’t want you to be hopeful, I want you to panic. I want you to feel the fear I feel every day - and then I want you to act.” Bringing awareness to the climate crisis is part of the solution.

Recognising the dangers of global warming, 195 countries are signatories to the Paris Agreement.

The Paris Agreementaims to limit the increase to 1.5°C above pre-industrial levels in order to mitigate the effects of climate change. The problem is that none of the participating countries (including all of the EU signatories) are on track to meet the goals of the agreement.

This failure to comply with the Paris Agreement is a major focus of the school climate strike movement. Since politicians have been quick to make speeches and promises but slow to actually enact necessary policies, other avenues of change must be considered.

Who will implement changes to alleviate the climate crisis?

There are three major groups that can have the most significant influence on climate change:

Thus far politicians are either unwilling or unable to create the dramatic changes that are required to limit the temperature increase to 1.5°C. Even the most climate-aware consumers have restricted power - they are limited to the products and services they are presented with by industries.

It falls on industries to provide solutions to mitigate climate change - especially since industries are a major contributor of greenhouse gas emissionsin the first place.

Industries are responsible for providing environmentally-informed solutions to consumers.

As part of her speech at the 2019 World Economic Forum, Greta stated, "Solving the climate crisis is the greatest and most complex challenge that homo sapiens have ever faced. The main solution, however, is so simple that even a small child can understand it: we have to stop the emissions of greenhouse gases."

Since the IPCC estimates that nearly a quarter of global greenhouse gas emissions come from industries, it makes sense that a major component of the solution needs to take place at the industry level. Industries are responsible for developing and utilising new technologiesto assist in solving the climate crisis.

BonCulina is committed to being a more responsible food service provider, offering a system that helps reduce the environmental impact of every organisation that uses it - and how fitting that it is implemented in schools, for the very people who are raising awareness of the climate crisis!

BonCulina offers a simplified approach to serving meals in bulk. By utilising Torus Pak®packagingtechnology, customers have no need for a fully equipped kitchen, chef and professionally trained staff - but they still get the end result of gourmet plated meals!

In addition to lowering emissions by eliminating the need for a full kitchen, the BonCulina system also reduces food waste. Relying on pre-portioned frozen ready meals increases food’s shelf life and limits plate waste. This is important because when wasted food ends up in landfills, it releases methane - a much more powerful greenhouse gas than carbon dioxide.

Further, BonCulina invests part of the profits into the ‘A Meal for a Meal’ CSR programme. For every meal sold by the company, a meal is provided to a child in Africa. Through the company’s partnership with SOS Malta, a humanitarian organisation that has been in operation since 1991, over a million meals have been provided to children in need - and the number continues to grow!

BonCulina issues a challenge to other industries to become more environmentally friendly.

Industries have a responsibility to not only monitor their own actions, but to provide more environmentally sound solutions for consumers. BonCulina has developed a method to help organisations all around the globe lower greenhouse gas emissions, and the company continually seeks ways to improve its actions and methods.

At BonCulina, we want to issue a challenge to other industries to step up and make positive changes to increase the sustainability of their activities. Future generations will either praise or condemn the actions we take today regarding the environment. School climate strikers are rightly claiming that their future has been stolen from them. We aim to give it back by being a responsible brand and doing our part for the environment - and we encourage other industries to do the same.